Mr McPhee. His house was arguably the first to be built in the area.

Planted the chestnut trees and set out the garden. 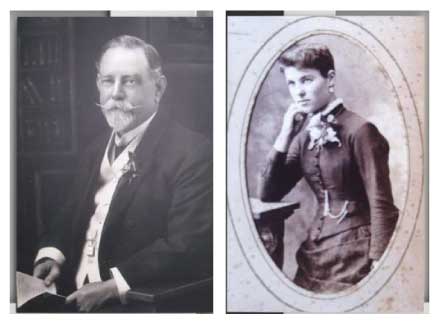 Mr. & Mrs. Squire Kennon. The Chestnut Hill property was first recorded as part of a subdivision of "South Sassafras" in 1890. In 1908 the property was purchased by Mr Squire and Mrs Elizabeth Kennon. They were a wealthy family who lived in Hawthorn. The property was reduced in size when the shire compulsorily acquired 3 acres to construct the current "Monbulk Road" arterial and with that the avenue of chestnut and walnut trees, from which the property got its name, was removed and lost forever. One sentinel chestnut remains at the property entrance, now over 100 years old.

Squire, with his brother Thomas, owned a tannery in River Street, Richmond. They supplied leather boots for soldiers during the Boer War and had interstate offices. Squire was, for a time, President of the Master Tanners and Leather Manufacturers. He travelled with James Hardy in Europe, seeking improved machinery and methods to encourage industry in Australia.

Mr Squire Kennon had passed away from a debilitating stroke in 1920.  In 1923 Elizabeth Kennon built a double-storey Californian bungalow as her "country residence" (the current Chestnut Hill house).  The interior of the house is largely intact and boasts a number of original features.

The Kennons were a generous family to the local and wider community and hosted many charitable functions in Kallista.

Mrs. Kennon officiated at the cutting of the ribbon ceremony for the Inauguration of Kallista, a forest village.

Change of name from South Sassafras to "Kallista", (meaning "most beautiful", from the name of a Greek island, north of Crete. (Now called Thera.)

The Kennon's gardener, Angelo Boroni, was a frequent winner of the Spring and Autumn Kallista Flower Show for his fruit and vegetables.

Outreach International Church   Restored the Chestnut Hill House, built the Lodge in 1977/78 and terraced and landscaped the property.

Restoration done to the Chestnut Hill House and Chestnut Cottage.   Extended the Lodge bedroom wing and extended the Living and Dining Rooms in the Lodge.

Restoration of Lodge, Cottage and House.

Aboriginal ceremonial grounds and meeting places were located at Clematis, The Patch, Silvan, and Mt. Dandenong.

Of importance were the upper Olinda Creek area, Bald Hill in the Cardinia Reservoir catchment and Monbulk.

The Wurrundjerri people inhabited the foothills, near water, where fish, game and wildfowl were abundant. The forest provided food, clothing, and shelter.

The first settlers arrived in 1835 and the land surrounding the Dandenongs quickly became pastoral leasehold. The native people supplied squatters with fish and ducks from the waterways. They acted as guides into largely impenetrable forest where some of the tallest trees in the world were found.

With the advent of Puffing Billy in 1900, road improvements and the change to motor buses, tourism reached it's heyday in the 1920's, bringing brief prosperity to the many guest houses scattered throughout the hills. 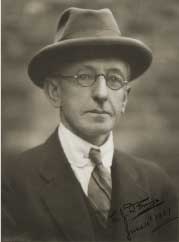 They looked to the hills from the beginning, finding the Dandenongs an ideal setting for their creativity.

Before World War I, C. J. Dennis (pictured) completed "The Sentimental Bloke" in a superseded horse tram at Sunnyside, Kallista, where others of similar tastes gathered in this original accommodation.

Monbulk was a second home for Mrs Aeneas Gunn (Author of "We of the Never Never") who did much of her writing there.

Rose Charman's Cottage in Emerald was the venue for another group of writers.

Sir Arthur Streeton in Olinda and Tom Roberts in Kallista were the best known of many artists who frequented the hills from the 1920's.

The battle continues as it has done for 150 years, to maintain a balance between preserving the natural environment and the requirements of industry and rural living. The diverse wildlife that inhabits the remaining forest reserves depends on maintenance of bush corridors in private hands.

Fires have swept through Kallista as elsewhere in the hills, leaving few traces of early settlement in the area.

Timber fellers came first in the early 1850's, following down the creeks where the mightiest trees grew. The stumps of some of these were big enough for a family to live in.

Sherbrooke Forest today is all regrowth. It was possible for early settlers in the trackless bush to lose themselves, even between the bark hut and the creek that provided their water supply. One stump beside the track from Belgrave became a meeting place where a settler left an individual stone as he passed by. If he did not return to collect it, his neighbours would be alerted, and a search would be organised for him. A recreation of this symbol of the past stands opposite the Kallista Primary School.

Artist Tom Roberts' studio still stands on private property, and at the top of Tom Roberts Road, the subject of one of his paintings; the Pink Cottage, restored after being crushed by a falling tree. In the early 1920's the school hall was built.

With thanks to Dorothy Williams (writer and local historian) for the engrossing chats. 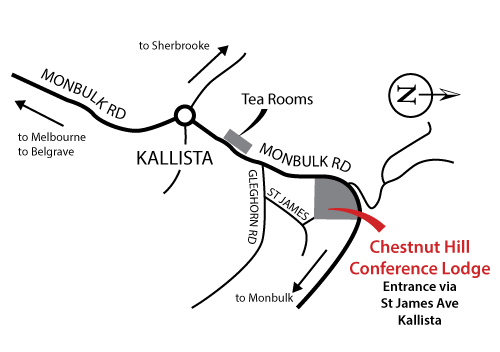